Artistic Donor Walls: Use Design to Tell a Story

In 2014, the Detroit Institute of Arts (DIA) was in a dire position. As the city of Detroit was undergoing federal bankruptcy plans, the museum was in danger of losing their art collection. Fortunately, thanks to the generous donations from private donors, corporations, and foundations, the museum’s treasures were protected from creditors; through what became known as the “Grand Bargain.” The DIA engaged Ideation to create an artistic donor wall to recognize the donors that contributed an astonishing $100 million to the unprecedented “Grand Bargain.” 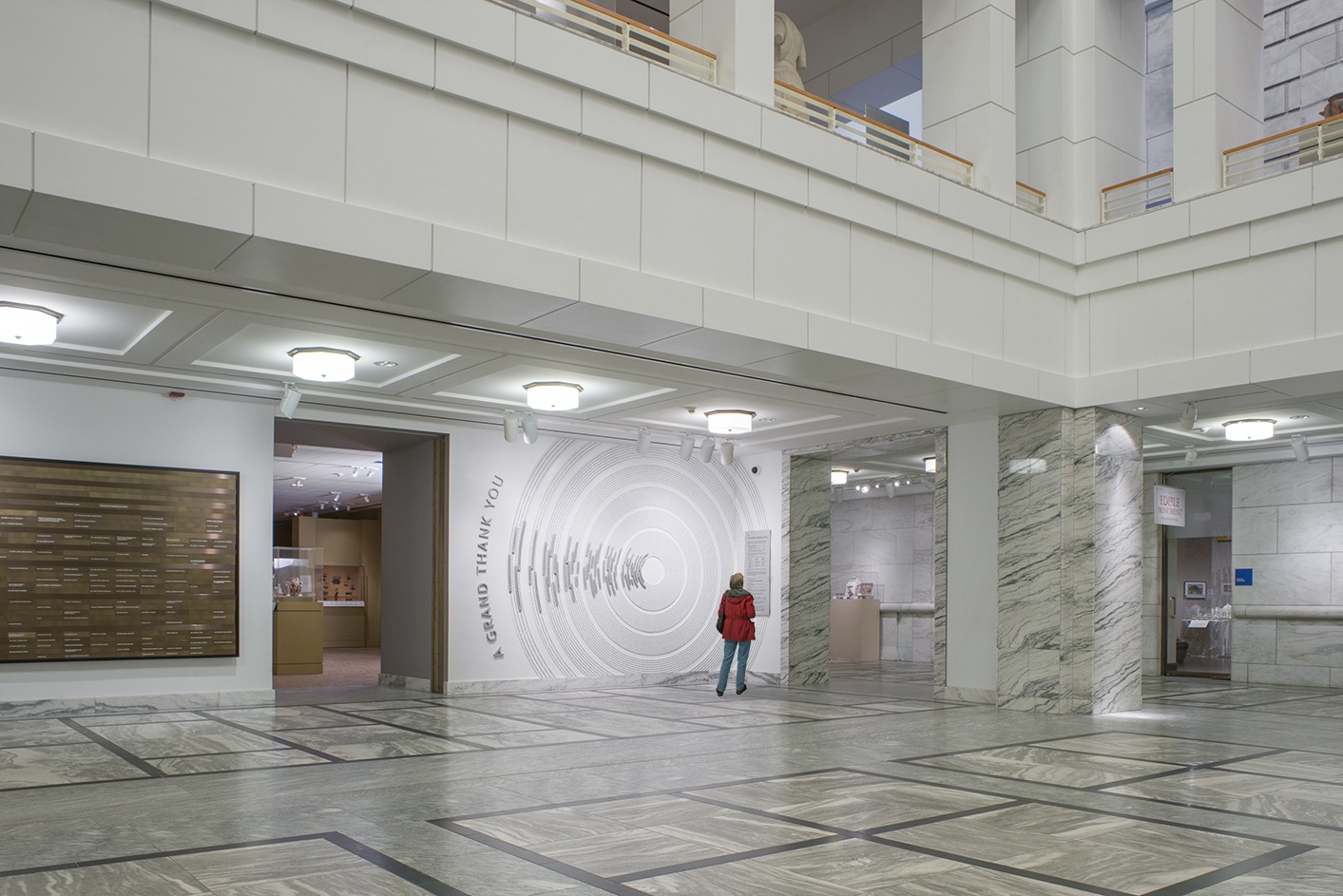 According to Ideation project leader, Michael Garavaglia “While recognizing these generous donors was of utmost importance, we all wanted to produce a work of art that would draw viewers in to understand and appreciate the story – how donors came to the rescue of art under a very creative arrangement.”

It began with a concept developed by DIA designers, Everett Keyser and Serene Arena. The concentric circles in the concept circles represented the ripple effect of the Grand Bargain that will be felt in the community for years to come. Ideation’s role was to help bring this concept to life-solving questions related to colors, materials, finishes, dimension, fabrication techniques, sizing and ultimately, the installation. 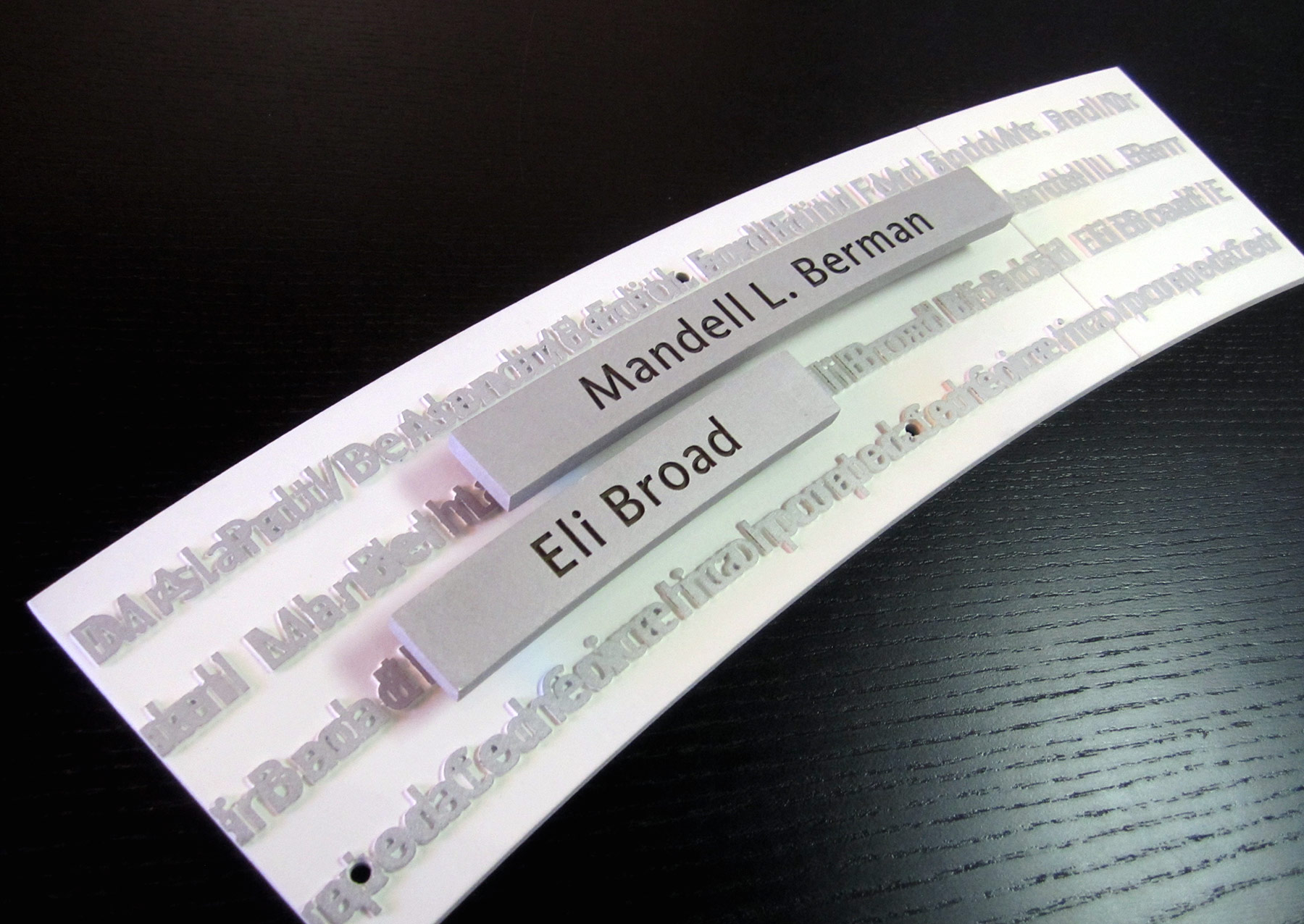 Donor name tiles floating above their respective rings formed by their own name in a raised overlapping pattern.

As the DIA was scheduling a special event to unveil the installation and recognize the key donors, Ideation’s creation of a master plan to timely usher the team through the steps of concept refinement, prototyping, engineering, production, and installation in 4 months was critical for an on-time completion.

Prototyping of key elements was a high-value step to make everyone involved comfortable with the fit, finish and overall effect. Donor names appeared to float right off the wall by using hidden stud-mount attachments with a stand-off. The bottom layer of textured “ring panels” had pre-aligned placement holes to serve as a precise placement pattern when installing the top layer of donor panels. 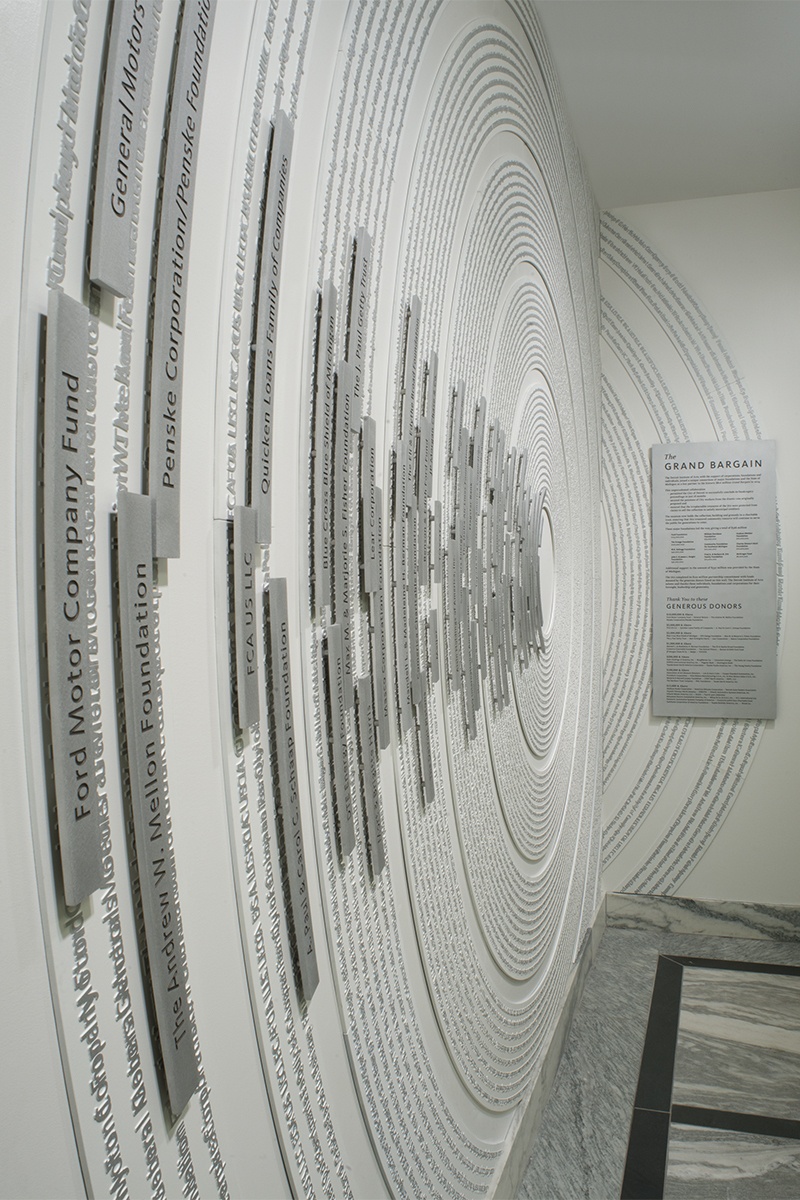 “Sweating the details is one of our core values and this project gave us plenty of details to sweat,” said Garavaglia.  “A non-directional random orbital finish was chosen for the aluminum surfaces to produce uniform color and tone from all viewing angles. Solid aluminum dimensional panels were cut into rings and routed to varying depths with both recessed and raised graphic elements. The dark bronze used for the donor names is a nice contrast against the aluminum and added warmth. It also subtly tied in with the bronze colors used in the existing donor recognition systems throughout the museum. Having the rings span two walls across a 90-degree angle required a high level of precision in the design and fabrication to achieve a perfect fit.”

Installation occurred over a 3 day period.  Precise patterns were created and used to drill hundreds of holes necessary for attachment points.

Garavaglia and his team made several visits to the site to plan the installation and identify any obstacles prior to the installation. One of these obstacles was an electrical outlet to the lower right of the installation which could not be removed. Ideation collaborated with the DIA facilities team to recess and cover the outlet to keep it from distracting the piece. 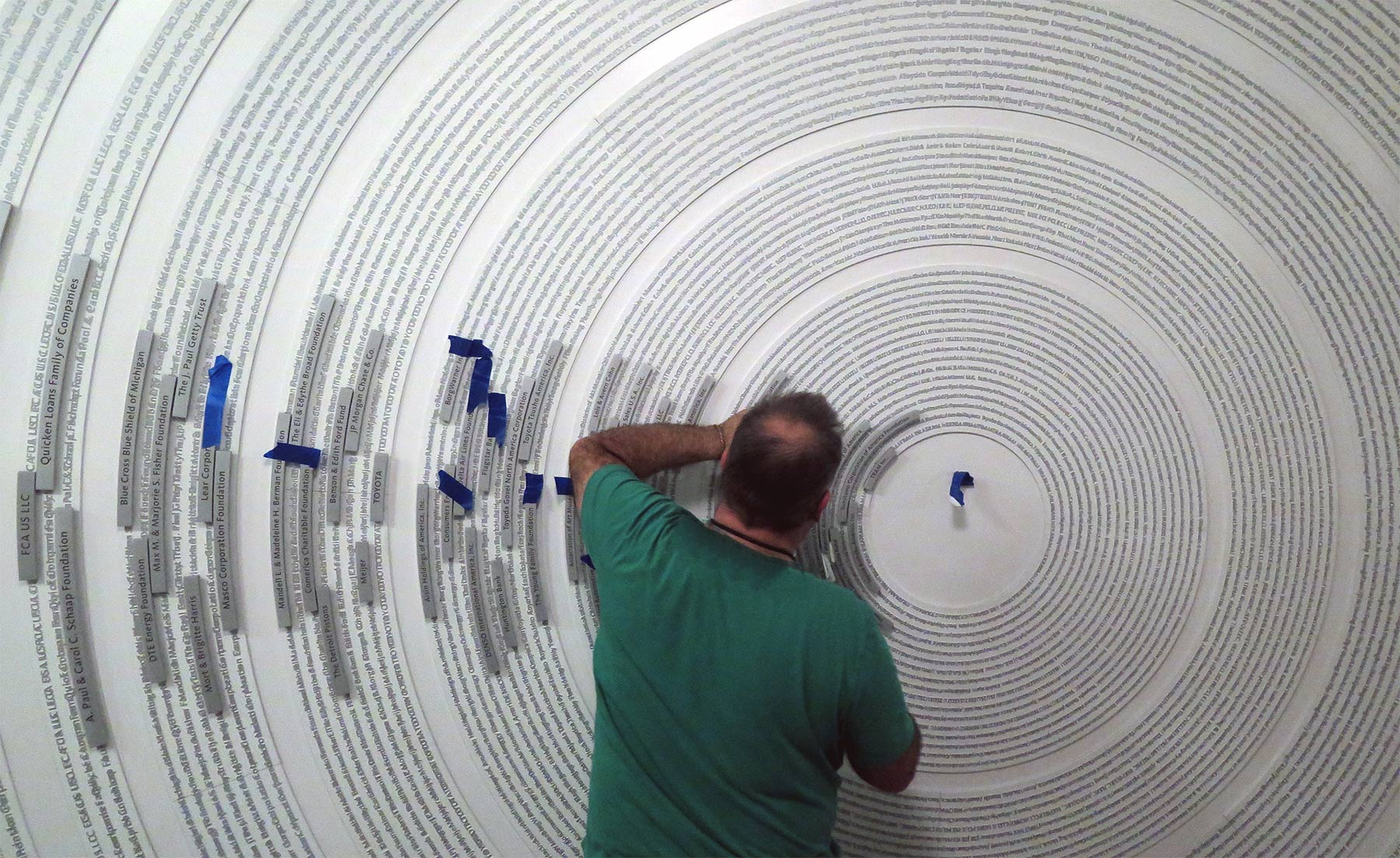 Hand placement of individual donor plaques on their respective rings.

By the end of the project, the Ideation team felt the pride they were hoping to evoke with the artistic donor wall.  “As we were doing our final post installation review, the installation was visible to the public – everyone who came into the courtyard was instantly drawn to it and wanting to interact with it,” said Garavaglia. 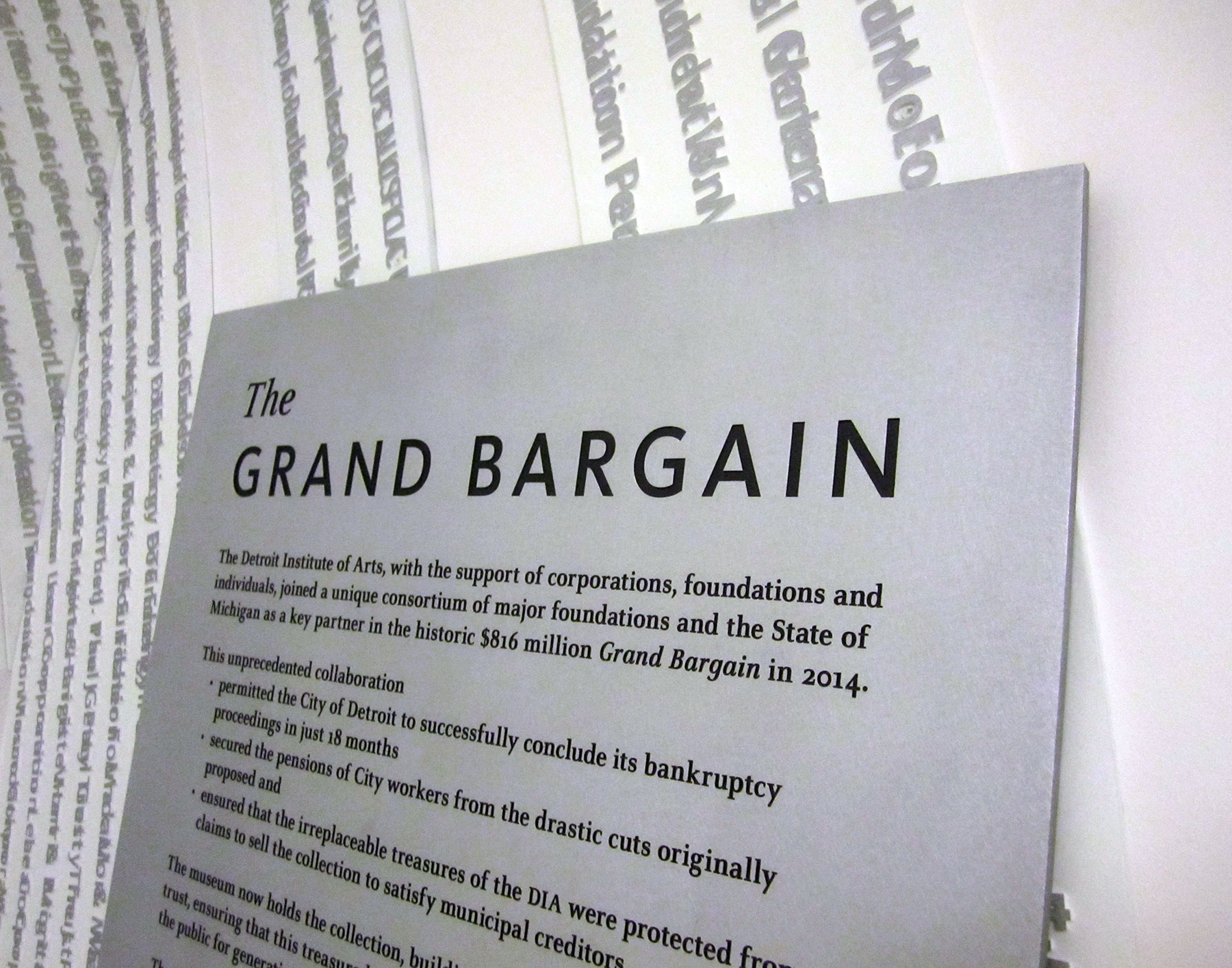 A narrative label cast from 1/4″ thick aluminum with recessed and paint filled copy.

“The placement and location of the display is very attractive as most visitors pass by when visiting the museum. Its style contrasts with our other signage and like a target draws people to the wall and focuses their attention on the wall and our story.

The wall looks like a piece of art. From a distance a visitor only sees the general shape and color. They go to look closer at the “piece” and see that it’s signage, but then look and view it like artwork. Reading the “label” and looking intently at the names printed on the wall and making out the details. This interaction is unique and helps make the sign part of the museum’s collection.”  Stepanie Rondy, Campaign Officer, Detroit Institute of Arts.

According to Ideation President, Daren Bossenberger, “artistic donor walls use design to not just recognize donors, but to draw people in to experience a story, a story in which the donors were the main characters.  The design should help tell the story.”

See how Ideation provided outdoor signs and graphics to create a buzz in the neighborhood around the Detroit Institute of Arts.